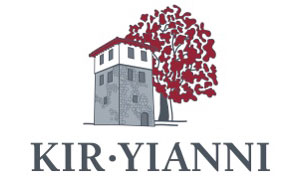 KIR-YIANNI was established in 1997 by Yiannis Boutaris, a leading figure in the Greek wine industry, following a tradition of four generations winemakers.
With its two wineries in the mountainous regions of Naoussa and Amyndeon in Northwestern Greece, KIR YIANNI focuses on the production of high quality wines, which combine style with authenticity and offer true enjoyment.

The KIR YIANNI Estate (Ktima) in Naoussa, one of Greece’s largest vineyards, is located at the highest point of the viticultural region. The 60-hectare Ktima, spearheaded the revival of the prized Naoussa Appellation in the 1970s and paved the way for the production of terroir wines. Today, pioneering scientific work continues, as the 40 parcels in the Ktima are individually managed and vinified.
The KIR YIANNI vineyard and winery of Amyndeon are located on the shores of lake Vegoritis, defined by the mountains of Kaimakcalan and Vitsi. Amyndeon has evolved into one of the most promising Greek winemaking regions. It has a characteristic microclimate and soil, suitable for the production of top-quality wines, due to the high altitude of the area and the four lakes surrounding it. The privately owned vineyards are located at an altitude of 700 m, covering a total surface of 16.5 ha. The soil here is sandy and poor, giving the possibility to produce wines of high finesse and rich aromatic character. The climate of the area is characterized by cold winters and hot summers, while the presence of four lakes makes the microclimate milder and suitable for the cultivation of white varieties. Moreover, the practice of contractual agriculture over a total area of 30 ha, guarantees the control of the agricultural methods applied and the use of selected raw material.
Under the current lead of Stellios Boutaris, son of Yiannis, the expanding family business produces yearly 50.000 cases of authentic wines from indigenous and international varieties and exports them to more than 20 countries. The cornerstones of the KIR YIANNI philosophy remain unchanged: desire for innovation, respect for tradition and true knowledge of the wine, from the grape to the end consumer.